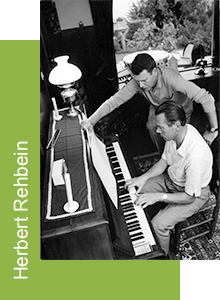 Current and often short-lived fashions in music were never something to bother Kaempfert unduly. In the early 1970s, as if he felt he still had to prove his own versatility, he recorded his version of the disco classic Theme From ‘Shaft’, which resulted in a call from Isaac Hayes, the man who had composed and originally performed this top hit: “A fantastic version,” Hayes announced over the phone, “I like it better than my own!” And with the modesty that was characteristic of the man, Kaempfert acknowledged the praise of a successful colleague. That he himself could easily switch over to this style of the day is demonstrated by two outstanding compositions of his own that he wrote in the summer of 1978 together with his long-standing friend and partner Herbert Rehbein: Keep On Dancing and Frisco Disco. 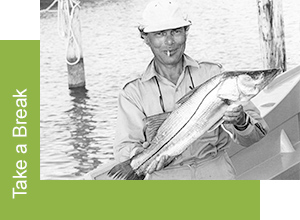 Concert-giving and composing, recording and producing. Once up to speed, there was little that could slow Kaempfert down. Anyone who had assumed that the fast and furious life he had led in the ’60s would be followed by a somewhat more leisurely way of going about things was sorely mistaken. Yet, despite his full schedule, Kaempfert did take the time off he urgently needed: to chill out, take a break, recharge his batteries. As well as spending several weeks every summer at his holiday house on Mallorca, he also flew once or twice a year from Switzerland, where he now lived and worked, to Florida and the Everglades, a place of retreat for him. There he would stay with people he knew who lived on houseboats and go off on fishing trips with them. A person fond of nature, Kaempfert felt happy and at ease there – the composition entitled In The Everglades being dedicated to his friends in Florida. 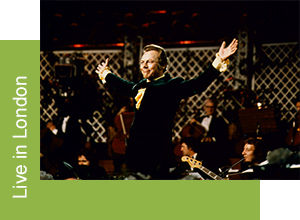 Bert Kaempfert on vinyl had long since become a synonym for success, of course. But his fans also hoped and clamoured ever more frequently for the opportunity to experience his unparalleled sound at a live performance. And in 1974 the concerts he gave in England turned out to be a crowning moment in his career, with Britons, staunch fans of Kaempfert and his music from the outset, coming to enjoy two stupendous appearances that the orchestra made in London’s venerable Royal Albert Hall.

News of the rapturous reception they had been given in London of course carried back over the North Sea to Germany in no time. Kaempfert was equally as enthusiastic himself and began by taking on the music direction of two major TV shows with Freddy Quinn. And better was still to come: Kurt Collien, the Hamburg impresario, succeeded in organizing a spectacular concert tour of Germany with this programme – no mean feat considering that Collien had to coordinate concert dates to suit the almost fifty top-class musicians from Europe who played in the orchestra. 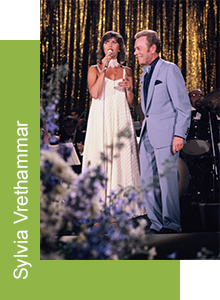 One of the many high points of these live performances was a special segment featuring swing music, a style of music that especially appealed to Kaempfert, with the Count Basie version of Strangers In The Night, for example, being one of the ones he liked most. And the LP SWING, recorded in October 1977, serves to underscore his love for this particular sound. With SWING he fulfilled a dream going back to the days of his youth, an LP with which a great and talented musician paid his very own musical tribute to the work of legends such as Woody Herman, Tommy Dorsey, Benny Goodman, Glenn Miller and others. Numbers such as At The Woodchopper’s Ball, In The Mood and Lullaby Of Birdland were the classics among the classics in a fabulous array of songs.

Now at last, in Germany as well, Bert Kaempfert’s music enjoyed the status that had long been due to it and its creator. German television responded and in 1979 presented “Bert Kaempfert In Concert” – with the top-class Swedish singer Sylvia Vrethammar appearing with this fabulous orchestra. That, in turn, naturally led to a fresh concert tour throughout Germany, including appearances in Luxembourg and Zurich – a tour which helped Bert Kaempfert keep his mind from dwelling on the sudden death of his friend Herbert Rehbein on 28 July 1979, an event that affected Kaempfert deeply.