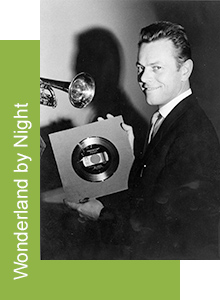 Milt Gabler was the man the Kaempferts went to see in New York. Head of A&R at Decca and someone who knew the entertainment business like the back of his hand, Gabler immediately recognized what exceptional talent this man from Germany possessed. He had Wunderland bei Nacht released as Wonderland By Night and out of Berthold Kämpfert made Bert Kaempfert and His Orchestra. And Gabler was proved right: first this instrumental shook the US market to its very foundations and then rapidly rose to the top of all the relevant charts worldwide. Bert Kaempfert had made it: his name had now attained international prestige.

Back in Hamburg, Kaempfert was then to make his next encounter, an encounter that would have far-reaching consequences. At the Top Ten Club on the Reeperbahn his attention was drawn to Paul McCartney, John Lennon, George Harrison and Pete Best, four young musicians from Liverpool. At that time they were known as the “Beat Brothers” and were providing the backingfor a fellow Briton, singer and guitarist Tony Sheridan. And once again Kaempfert’s instinct did not fail him – he listened to their playing and produced several songs with these youngsters from the British Isles. The single My Bonnie, though nobody could have known it at the time, in fact turned out to be the first official recording ever made by the Fab Four from Merseyside.

For other musicians such a collaboration would have been the ultimate high point of their entire career – for Kaempfert, though, it was little more than an interlude as a talent scout. His “own” music was naturally the determining factor in his life and his compositions just seemed to flow from his pen – song after song belying any suspicion of being mass-produced music. On the contrary. 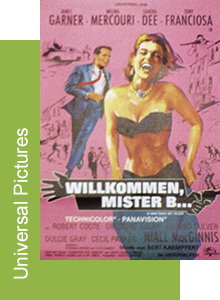 In the early ’60s the music Kaempfert wrote himself or the arrangements he made of other composers’ music only served to reinforce his already unimpeachable reputation. His inimitable sound – those distinctive (“dry-cracking”) figures in the bass, a swinging rhythm, brass and a blend of choir and strings so meticulously underlaid that it seemed to hover – continued to land him success after success. His arrangements of Bye Bye Blues, Red Roses For A Blue Lady and Three O’Clock In The Morning set new standards, and the pieces which he, in whatever form or function, had had a hand in, seemed to take off virtually of themselves and be guaranteed to climb to the top spots in the hit parades.

In 1965 the American production company Universal engaged Kaempfert to write the music for the Hollywood film A Man Could Get Killed. And it was from this music that a song emerged that would become one of the most famous songs ever written: Strangers In The Night. In 1966 it catapulted Frank Sinatra back to the top of the charts, a singer whose ancestors had once immigrated from Italy and whose name in recent years had only appeared in the lower reaches of any of the charts. 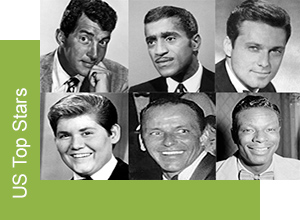 A few months earlier Kaempfert had also helped another Italo-American to a worldwide hit: Spanish Eyes (composed originally as Moon Over Naples) brought Al Martino back into the limelight with a vengeance. What is more: there are only a few songs to date that have been covered more often – estimates put the number of different versions in existence today at around 500…

Sinatra and Martino, however, were no exceptions. Leading American stars, above all, were eager to perform Kaempfert creations: Wayne Newton was garlanded by Danke Schoen, even today still a welcome closing number at the end of all manner of shows; the great Nat “King” Cole had a triumphal success with L O V E., as did Jack Jones with Lady, Dean Martin with I Can’t Help Remembering You and Sammy Davis jr. with Lonely Is The Name– they all could rely on the high-quality workmanship originating from Bert Kaempfert’s pen. And fellow artists such as Johnny Mathis, Anita Kerr, Pete Fountain and Bobby Hackett, hardly strangers to success themselves, did not hesitate to fill whole LPs with exclusively Kaempfert music. Indeed, ever since the mid-’60s, the repertoires of renowned soloists, bands and orchestras would not be the same without such songs as Afrikaan Beat, A Swingin’ Safari, That Happy Feeling and many, many more.