Freddy, Elvis and a Wonderland 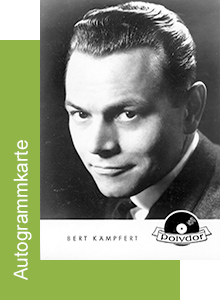 Hamburg, 1951. Daughter Doris was born, and the name Berthold Kämpfert was now well known (for quality) both in and around Hamburg. So it was only a question of time before the Hamburg-based record company Polydor, which had long since had an eye on this musical all-round talent, approached him and secured his services.

He composed such melodies as Catalania, Ducky, Las Vegas and Explorer (Louisa), which he performed with a small ensemble. And, as it was fashionable at that time for artists to work under a stage name, for a while he appeared as bandleader “Bob Parker”. As producer, he looked after many of Polydor’s star singers of the day, such as Mona Baptiste, Margot Eskens and Rudi Schuricke, and, in his role as talent scout, promoted Evelyn Asal, a contralto and recent find from the Hesse State Opera in Wiesbaden, recording twelve songs with this singer, now rechristened “Cindy Ellis” for her entry into the world of popular music. 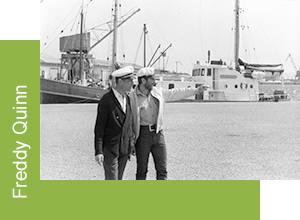 In the meantime, at the Washington Bar in Hamburg’s St. Pauli nightclub district, there was a singer starting to make his mark as an artist, a singer who would become one of the greats in the world of German popular music: Freddy Quinn. In 1959 Bert Kaempfert arranged and produced Die Gitarre und das Meer (The guitar and the sea) for him, one of the first major hits in the history of entertainment of that day. Also at this time, spinning on many a record turntable, was a 1958 Kaempfert arrangement (with Billy Mo on trumpet) of the film song Mitternachts-Blues (Midnight Blues) – an expressive piece of music that featured in the German hit parade for 22 weeks and reaching the Number 6 spot. Moreover, being one of the pieces in demand on the playlist of the Armed Forces Network (AFN) in Europe, it was therefore given a lot of airtime and sold well outside of Germany, too. 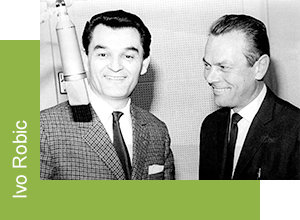 The success with Freddy Quinn was no flash in the pan, though. Shortly afterwards there then came Morgen: skilfully arranged and presented under Kaempfert’s direction, it earned the exceptional singer from Croatia, Ivo Robic, his first gold record. And to the present day, Morgen remains one of the most attractive and successful songs in the entire history of German popular music.

No question about it: Bert Kaempfert’s skills had long since become of international quality, with 1960 witnessing a cooperation of a type that was as special as it was ground-breaking. When Elvis Presley, the idol of America’s teens, was posted to Germany to do his military service, great pains were taken to avoid this interrupting his career. 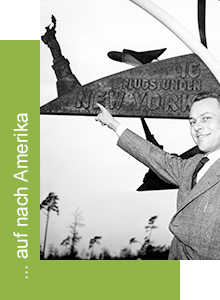 A new film starring the rock ‘n’ roller was planned and suitable pieces of music were needed. And once again Kaempfert’s instinct did not let him down: he put his money on the folk song Muß i denn zum Städtele hinaus and made an arrangement of it. Entitled Wooden Heart, this production not only became a worldwide hit for the “King” but, sung by his compatriot Joe Dowell, climbed to the very top of the Billboard charts. Feelers were now put out in the direction of America, and very soon the name Bert Kaempfert would be established on the other side of the Atlantic Ocean.

And this, although he had not played his as yet most powerful trump card. Wunderland bei Nacht had already been written and was languishing fully arranged and produced in a drawer. However, as is so often the case, a prophet counts for little in his own land: Kaempfert was forced to realize that there was but limited interest in Germany for this beguilingly beautiful melody. Yet to realize this was one thing: to accept it quite another. Bert and Hanne were agreed: “The time’s now come to head for America.” And they took the production with them on the plane.