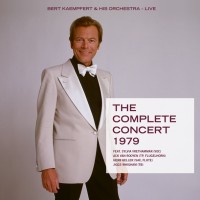 Bert Kaempfert went on tour in November 1979, giving fourteen concerts before packed houses in Germany, Luxembourg and Switzerland. In addition to his orchestra, its outstanding soloists and the Botho Lucas Choir, Bert Kaempfert invited the eminently likeable Swedish singer Sylvia Vrethammar to join them as guest star. Not only did this exceptional jazz vocalist perform his compositions in precisely the way he had envisaged but so successful was the tour that it would be continued in England the following June.

This had all been preceded by a televised public concert which, produced by Hessen Radio, was given on 20 June of that year in Neu-Isenburg’s Hugenottenhalle and which, on Easter Sunday 1980, was then broadcast by ARD in a version edited down to sixty minutes. Bert Kaempfert saw this television production as an opportunity to bring out an LP for the tour with a selection of twelve items from the concert programme, yet this now historic recording of the concert was never processed and released in its entirety. And so Peter Klemt, who as sound engineer worked with Bert Kaempfert for more than twenty years recording all his productions, once again took up his place at the mixing console.

So that, at long last, the full-length version of “the concert highlight of the year”, as it was hailed by the press of the day, is available for the very first time, with the musical items following the selfsame sequence that Bert Kaempfert devised for the concert.

And, last but not least, 2008 will be the 85th anniversary of Bert Kaempfert’s birthday on 16 October, and it is to this fabulous musician and all his loyal fans that the present recording is dedicated.