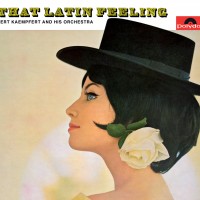 Surely no musician on earth can resist the timeless attraction of Latin-American melodies and rhythms – and Bert Kaempfert was no exception. As early as 1958, he had proved his ‘Latin Feeling’ with a number of compositions and arrangements. In 1964 he then produced a whole LP dedicated to Latin-American tempi.
Alongside original Kaempfert compositions which are very true to his style, we find ‘all-time standards’: O Cangaceiro which achieved fame in 1953 owing to the film ‘The Bandit’; Maria Elena which a smash hit in 1963 for the guitar duo Los Indios Tabajaras; then we have the melancholic love song Bésame Mucho or Sweet And Gentle, Poinciana, and, last but not least, The Breeze And I. Latin-American rhythm is represented in all its variety – the cha-cha, rumba-bolero, merengue and, of course, the Brazilian Bossa Nova, which sparked off a craze in the USA in its day and can be heard here in the songs Say Sí Sí and Bert’s Bossa Nova.

Ladi Geisler not only guaranteed a “cracking” bass guitar, but also took the guitar solo in Maria Elena, The Breeze And I and Bésame Mucho; the trumpet solos were given to Werner Gutterer (Poinciana), Heinz Habermann / Werner Gutterer (Trumpet Fiesta), and Manfred Moch (Bert’s Bossa Nova); Emil Wurster’s tenor saxophone is to be heard in Bert’s Bossa Nova and Say Sí Sí (together with Karl-Hermann Lüer on the flute in the latter), while Willy Surmann’s bass clarinet vividly produces a special feature with the clucking of chickens in Chicken Talk.