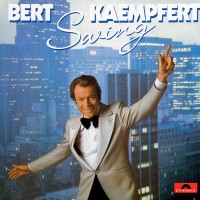 In October 1977 Bert Kaempfert fulfilled a long-cherished wish and recorded a complete album with 12 titles taken from the repertoire of the most famous swing bands. He breathed new life into these old favorites without detracting from their typical and highly unique original sound.

Renowned soloists, all of whom were regular members of his orchestra as of the 1970s, performed the solos in this production: Ack van Rooyen (trumpet and cornet), Herb Geller (flute and alto saxophone), Ferdinand Powel (tenor saxophone), James Towsey (baritone saxophone) and Jiggs Whigham (trombone).

Although Bert Kaempfert preserves the original tempo in his arrangement of Woody Herman’s Woodchopper’s Ball (original recording: 12 April 1939), his personal stroke of the pen is discernible in every other respect. Herman’s clarinet solo is played here by Ack van Rooyen. Trombone, baritone sax and further trumpet solos follow before the well-known riffs are heard to conclude the piece.

Count Basie’s One O’Clock Jump (original recording: 7 July 1937) sold millions; hard on its heels followed Harry James’s Two O’Clock Jump (original recording: 6 March 1939). The two works enjoy a similar structure. Conversation passes back and forth between the tenor sax, muted trumpet and trom-bone, while the continual build-up of the final choruses enhances the quality of this number.

Lullaby Of Birdland was originally conceived as a quintet (original recording: 17 July 1952 by the George Shearing Quintet). In Kaempfert’s masterly big band arrangement, none of the original atmosphere is lost: he merely replaces Shearing’s typical combination of piano, vibraphone and guitar with that of flutes and vibraphone, thus imparting an even lighter touch to the piece.

With the composition of the swing standard Air Mail Special (original recording: 13 March 1941 by the Benny Goodman Sextet), whose fame was partly due to the scat singing of Ella Fitzgerald, one is already aware of the bebop era yet to come – and it goes without saying that this was apparent in Kaempfert’s arrangement.

Woody Herman, the “wild man” of the big band era, made his most remarkable recording, Apple Honey (original recording: 19 February 1945), at the zenith of his creative period. In his arrangement, Bert Kaempfert dispenses with the aggressiveness of the original recording and incorporates several relaxed and loosely connected solo passages.

It was Stan Kenton who brought about the break with the tradition of swing and ushered in the era of orchestral jazz. Those who never really felt comfortable with Kenton’s recording of Intermission Riff (original recording: July 1946) will very probably enjoy Bert Kaempfert’s milder version.

Jumpin’ At The Woodside is a further number by Count Basie (original recording: 22 August 1938) which has always been a great favorite with the public thanks to its hypnotic riffs. Kaempfert takes the pace more slowly in his arrangement, while the solo flute, muted trumpet and trombone provide for plenty of variety.

Like numerous other numbers by Tommy Dorsey, Marie also landed in the charts in the early 1940s (original recording: 17 October 1940). Kaempfert takes the tempo somewhat more slowly and gives prominence to the trombone – clearly a tribute to the great trombonist Dorsey and his velvety sound.

In It’s Only A Paper Moon (original recording: December 1943 by the Nat “King” Cole Trio), Bert Kaempfert does not base his arrangement on any one particular version but concerns himself more with the title itself, which was a tremendous hit in the post-war years.

If ever a research poll were carried out to determine the most popular post-war number, Glenn Miller’s recording of In The Mood (original recording: 1 August 1939) would surely come out on top. Realizing that nothing could possibly improve this classic work, Kaempfert arranged the piece in a traditional manner.