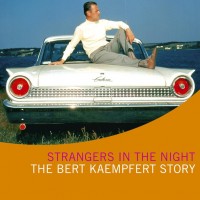 Long before the Liverpool sound even existed, it was Bert Kaempfert who, with My Bonnie, made the Beatles into recording stars – as early as 1960 preparing the ground for Paul McCartney, John Lennon & Co’s phenomenal international career: they partook of his knowledge, his skills and that creativity which he so undogmatically imparted.

Quite simply, they all felt at ease with the melodies this Hamburg composer and arranger created, melodies as light and unforced as their construction was inspired. Whether intentionally or not, he clearly knew how to reproduce in his music the nature of the person he was: pleasant, unassuming and restrained – yet at the same time infectious, expressive and brimming with joie de vivre. In short, melodies that do you good.

The biography of the man whose ideas occupy a firm place in the annals of music history began more than eighty years ago in a working-class district of Hamburg.

In Marc Boettcher’s documentary we hear from Bert Kaempfert’s friends and companions, Freddy Quinn, Hildegard Knef and James Last, among others, as well as from members of the Kaempfert family.