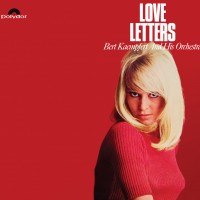 This album opens with a Bert Kaempfert composition that is one of the world’s greatest hits: Moon Over Naples. Recorded in September 1964, this piece was intended for the LP entitled THE MAGIC MUSIC OF FAR AWAY PLACES. It was not long before the excellent team of lyricists Charles Singleton and Eddie Snyder wrote romantic lyrics – and the melody became known as Spanish Eyes.

The recording by the American Al Martino sold million-fold and became “his” song, making the singer famous in all four corners of the globe. Spanish Eyes took its place among the evergreens. To date there are about 500 versions of the melody, published in highly diversified arrangements – from an accordion arrangement to a Russian balalaika ensemble complete with domra and bajan.

The other titles in LOVE LETTERS, recorded in February 1965, were released in the USA as a follow-up to THE MAGIC MUSIC OF FAR AWAY PLACES in the album THREE O’CLOCK IN THE MORNING and, of course, included this very single (from BLUE MIDNIGHT), which had just become a top-ten hit in the States.

This particular production is imbued with the typical “Bert Kaempfert Sound” of the mid-Sixties. The solo trumpet is played by Manfred Moch. A novel timbre is introduced by the use of a melodic guitar with muted strings, as in the Kaempfert composition The Moon Is Making Eyes and the old Lotar Olias hitDu, Du, Du which was a great hit for the Ames Brothers in the Fifties under the Americanized title You, You, You.

Three of the non-Kaempfert compositions come from the world of stage: Let A Smile Be Your Umbrella is a vaudeville song dating from 1928, A Nightingale Sang In Berkeley Square was heard in 1940 in a London theatre production called “New Faces” and was a great success for Glenn Miller and his singer Ray Eberle among others, and Rose Of Washington Square was sung by the famous singer and actress Fanny Brice in “Ziegfeld’s Midnight Frolic”.

The White Cliffs Of Dover, the closing number on the original album, was a song composed to arouse optimism during the Second World War and dedicated to suffering England; in its day it was another great success for Glenn Miller and Ray Eberle.

And of course an album entitled LOVE LETTERS must also include the number bearing the same name; here the track, which was produced in 1963, was taken from the album entitled DREAMING IN WONDERLAND.