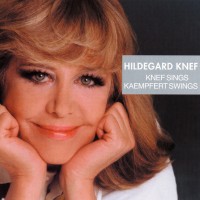 In remembrance of two great artists – the re-release of the 1979 legendary album EINS & EINS – KNEF & KAEMPFERT.

Just like Hildegard Knef, Bert Kaempfert was one of the few German artists to have enjoyed international success, and the two were good friends for several years. In the late 1970s, when the tracks that appear on the re-release CD were first released in a music scene dominated by Pop, Rock and Disco sounds, Kaempfert and Knef were both still seen as unsurpassed doyens of their music genre, easy listening orchestral music and the Chanson.

But this was not just a “rendezvous” between two artists. In fact the album represents the zenith of each of their very individual and special repertoires. In addition to Bert Kaempfert’s characteristic sound, the album includes another three of his compositions, L.O.V.E., Danke Schoen und Remember When (Wer will noch mal), all of which have been heard throughout the world in numerous cover versions from artists ranging from Nat King Cole to Wayne Newton. And these swinging numbers quite clearly appealed to Hildegard Knef with their natural walking bass style.

In fact, Knef’s huge hits of the 1960s – bearing the artist’s special trademark and with lyrics written by the artist herself – were also immensely popular in Germany. These hits were then performed in the joint album with Kaempfert, whose arrangements lent them a fresh touch. The album also included a song track (Du hast mir so gefehlt) of the hit Petula, which Kaempfert originally wrote as a purely instrumental track, as well as a song that he had composed especially for Knef: Der Mensch muss unter die Leute. Indeed, Kaempfert’s enthusiasm for Hildegard Knef was evident: “There are very few people in Germany who can swing like Hilde. I especially love her blue notes.”

To top it all the album has four instrumental tracks from the Bert Kaempfert Orchestra, making this a particularly appealing musical experience: these bonus tracks not only include Intermission Riff from the 1978 album SWING, but also three tracks from the 1979 album SMILE (the title song from the LP, I Cried For You and Just You, Just Me). Just You, Just Me is performed by the Bert Kaempfert Orchestra as a kind of overture for the musical rendezvous with Hildegard Knef – indeed this song is the ultimate prelude to a compilation of swinging hits which has since become a legend. If you listen very closely you can discover Hildegard Knef’s wonderful talent for combining lyrics and music in a way which is as natural as it is brilliant. This was the very art of Hildegard Knef, whose voice has now fallen silent forever. Thankfully a legacy of these two great artists has been left behind on this CD.