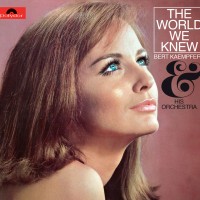 Recorded in March 1967, the album THE WORLD WE KNEW could well be regarded as the central part of a trilogy of LP productions, the others being STRANGERS IN THE NIGHT (1966) and MY WAY OF LIFE (1968). All three title numbers have a common factor: they were sung by no less than Frank Sinatra. Although the melancholy The World We Knew (Over And Over) did not achieve the legendary success of Strangers In The Night, Sinatra’s version entered the Top Ten on the American “easy listening” charts and was a Number 1 hit for several weeks in Argentina.

Five further compositions from the original album were written by Bert Kaempfert and Herbert Rehbein: the gently swinging I Can´t Help Remembering You, with which Dean Martin enjoyed worldwide success; Lonesome, with its solemnly majestic melody; Stay With The Happy People, which was influenced by gospel songs and spirituals; Vat 96’s simple riff theme, which is enhanced by the harsh accents of the brass and muted trumpets; and finally Talk, whose snappy theme is presented by two trumpets and which is treated stereophonically, one might say, towards the end in that it passes from one section of the winds to the next.

The remaining compositions are successful numbers of various origins: Rain was written as early as 1927 and has taken its place among the evergreens among other things thanks to recordings by the orchestras led by Sam Lanin and Arnold Frank for example. Lover was sung by Jeanette MacDonald in an imaginative musical from the early days of the “talkies”; during the Forties this number gained renewed popularity due to a recording by the trick guitarist Les Paul, while in 1952 it was a million seller for Peggy Lee. Originally one of the most popular waltzes by the Broadway composer Richard Rodgers, Lover takes on a completely new character in this almost aggressively swinging version by Bert Kaempfert.

Interpreted by varied artists such as Tex Ritter, Bing Crosby, Gene Autry and Ray Charles, the ever popular country and western evergreen You Are My Sunshine, written in 1940, was composed by Jimmy Davis, a professor of history and social studies who devoted himself to music in his spare time. In 1944 he became Governor of the State of Louisiana, having used his song in his election campaign – obviously with success.

The two remaining compositions are connected with one of the most famous names of the swing era – Glenn Miller. The Serenade In Blue, which is appropriately given a “bluesy” trumpet introduction by Bert Kaempfert, was premiered in 1942 in the film “Orchestra Wives” where it was performed by Glenn Miller’s orchestra and his singer Ray Eberle. Moonlight Serenade, which Miller composed in 1939, is probably the most popular signature tune ever to have been written for an orchestra in the big band era. During his studies with the “music mathematician” Joseph Schillinger, Miller wrote the melody “just for practice”; the serenade was one of his very first recorded hits and has lost nothing of its fascination in Bert Kaempfert’s version, despite its totally different sound with the leading piano.