Bert Kaempfert And His Orchestra 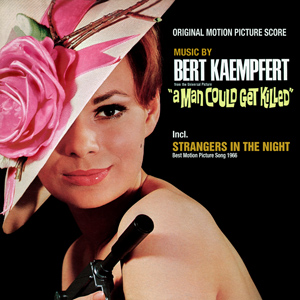 In the early 1960s Bert Kaempfert produced some well-known film melodies. One legendary example of this is his 1961 recording of “Wonderland By Night”. This was the first time a German musician made it to No.1 in the American charts.

In 1966 Bert Kaempfert was commissioned to compose the music for the American comedy thriller “A Man Could Get Killed” – in Germany shown as “Willkommen, Mister B…”.

This great musical film is now available for all Kaempfert fans and sound track aficionados in a digital version for downloading and streaming.

In spite of a cast including some major Hollywood stars such as James Garner, Melina Mercouri, Sandra Dee and Tony Franciosa, the film was not a box office success. However, the music won the Golden Globe for the best film song! And the text version of the instrumental “Beddy-Bye”, which provided the theme music for the film, became “Strangers In The Night”, a global hit for Frank Sinatra that today numbers among the international evergreens.

The sound track was recorded by Bert Kaempfert and his orchestra at Studio Rahlstedt, Hamburg/Germany. The arrangements came from the pen of Kaempfert’s friend and musical colleague Herbert Rehbein.